I Had Sex with my Ex, Do I Regret It?

November 11, 2017
My ex and I have been apart for about a couple of months, and in all that time we have talked on the pho e, seen each other, gone over and over why we broke, said the expected "I miss yous" and the "I still Love yous" .
I even had sex with someone else and told him about it. But that did not deter him when I asked him to come over, like I always do.
I was horny.
I was needy.
Lonely.
I did say I wanted to lay low for a while, stay Celibate and not think about men or sex or love.
I promised myself i could hold it off, I really believed I could.
But becoming celibate isn't for the faint hearted and it isn't a walk in the park either.

It seems as though the minute I set the intention to be celibate, save my sexual energy and enjoy my alone time, my entire body began to fire up like Light Bolts were shooting through my skin.
I felt horny for days like I have never felt before. I could have easily practiced Sexual Transmutation, used my energy for creative things and probably be happy, but I was in need!
I wanted to be loved, to be kissed, to be with someone.
Of course this need made it difficult to get my ex off my mind and as stupid as I knew I was going to be, I made the one call that would mess me up and drag me right back into the hole of my past.

"Can you come tonight?" I asked soon as he picked up the phone, "I want you."
I half wasn't expecting him to show up, but my ex, he always shows up. He might not bring me presents, spoil me with care and attention, but I could be off in the middle of the night calling and asking him to come seemingly out of the blue, and he would come. 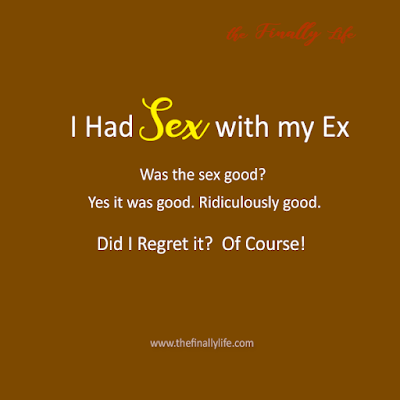 I never can tell if he always showed up because of the sex, and this was one of the reasons we had broken up.
I just could not see that we had something beyond sex. And sex doesn't even do it for me anyways so why do I want it if I am only going to end up sad, miserable, unhappy, feeling less of myself, right after the deed is done. This always happens.
And yes it did happen again.

Was the sex good? It seems as though people always want to know how good the sex was when you go back to your ex.
I guess I could say for a fact that it was the cocktail kind of sex. The one where different contrasting emotions collide - anger, lust, love, regret, shame, guilt, retaliation, The "I-Miss-you" kind of sex.
Yes it was good. Ridiculously good.
How did I feel afterwards?
Well for one I am glad to have gotten the urge and desire off me.  I woke in the morning completely regretting it of course and feeling cheap, and indisciplined.

I had given my power away again, to the one person whom i had earlier said was not worth it.
I had found myself settling and settling for even less in that relationship, and I was proud of myself initially for letting him go.
So you can imagine how much of a mess I truly feel right now.
How can I heal if I keep on going to my past, digging it up and freshening old wounds. What was I thinking having sex with my ex, especially when I had decided to be celibate. T finally gain control of myself and my emotions.

I do not know how I feel sincerely but I am very hopeful that I would make an update post where I am so proud of myself for holding on and sticking it out being single and celibate.
For now, I must have given my Ex the sour impression that I cannot do without him, that he's got a hold on me and I am something he can pick up at will.

Well that's quite sad really. But I refuse to dwell on it. I am going to come out of this healthier, happier and much wiser.
Cheers to me, on a Sex free 6 Months ahead!

Did you enjoy reading that? Please leave a comment with your thoughts!

Popular posts from this blog

Want more Money? Here's A Question that Can Change your Life.

October 23, 2017
What you make in Life would be directly proportional to the weight of your Service to man. But your service to man would be of no good if you cannot serve without thinking of what you'd make. You have to get to that place in your servitude, where you can do it whether or not you would make money. Can you do it for Free? So the question, shouldn't be "How Can I make More Money?" but instead, " How can I be of more Service to Mankind/the world? " When I asked this question, my whole life changed! And it had nothing to do with what I was doing for work at the time, but just 'How Can I serve, and serve better? What could I possibly do to help more people? I realized that in answering the question ' How Can I Serve '  , I had to face the question ' What Do I Have to serve with?' You see your servitude would always go in line with what you have. And long before you serve with what you have physically, say money for charities and expanding your
Post a Comment
Read more

October 23, 2017
In finding your Life's Purpose, here is a Question that I think can help. "WHAT DO I HAVE?" What do I Have to do the things needed for me to do in order that I may live a better more advanced life? Let us take the first question "What Do I Have?" This question helps you see beyond the physical space and deeper into yourself in search of your divine gifts. When you came into the world, you came in with something only you could have brought here. It was in your mind and in your heart. It was embedded in your soul. You knew IT. You sensed IT. You followed IT instinctively, intuitively, emotionally.  You felt it, you heard it, you followed it. For some of you, as you followed it, your parents watched you with disapproval and eventually spanked it out of you. "You better face your books," they said "And stop wasting your time with that." So you dropped it, forgot about it and slowly sank into a boring humdrum life without IT. For some, your parent
4 comments
Read more

The Woman who Wrote a Letter to God!

May 14, 2016
T he woman sat with her hands buried in her laps, her concentration held by the Pastor in a tight grip as he took the congregation back on his teaching in summary. It had been a quick but very enlightening service for her and she was almost certain she could feel the spirit of God sitting beside her. Although of course beside her was the man in a grey shirt, who had given her his best wide grin when she had asked if she could sit beside him. He turned to her now and extended his hand as the Pastor said "Look to your neighbor to your left and right and say 'The Peace of the Lord be with this week'". She offered her best smile, "The peace of the Lord be with you this week,'" she returned. "Now let us package a good offering to the Lord our God who is our ultimate provider," the Pastor continued. "The principles of Giving and Receiving have not changed since the beginning of time till now. Our God is the same, yesterday, today and alw
3 comments
Read more